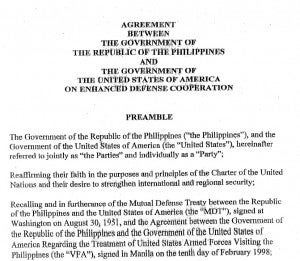 The first page of the Enhanced Defense Cooperation Agreement signed by the executive branches of the Philippines and the United States.

MANILA, Philippines — There is no Enhanced Defense Cooperation Agreement without us.

The Senate took the position, on Tuesday, that the country’s Enhanced Defense Cooperation Agreement with the United States was a treaty and was invalid without its concurrence. The Senate adopted the resolution of Sen. Miriam Defensor Santiago declaring the EDCA invalid for skipping the Senate.

Sen. Pia Cayetano was absent during the vote, but later manifested on the floor that she was in favor of the resolution.

“This is a victory for the Senate and it might also shadow, we don’t know in what way, the verdict of the Supreme Court,” Santiago told reporters after the vote.

She also said she was “very, very very happy I feel like I can almost jump up and down.”

The Supreme Court is set to resolve the petitions challenging the constitutionality of the EDCA, which Malacanang insists was just an executive agreement and thus did not need the Senate’s imprimatur.

Santiago hopes the decision of the Supreme Court would coincide with the Senate resolution, a copy of which would be sent to the court. But if the high court would rule otherwise, then two co-equal branches of government would be on opposing sides on one issue, she said. 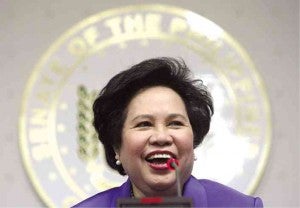 Should the Supreme Court rule that the EDCA should have Senate concurrence, she would vote against the agreement.

She would object to it in the same vein that she objected to the Visiting Forces Agreement.

“The strong sense of the Senate that it embodies is a confirmation of its supremacy over any self-serving speculation that is forced subjectively on the Constitution,” she said.

She pointed to Article 7, Section 21, of the Constitution stating that no treaty or international agreement could become valid and effective unless concurred in by at least two-thirds of all the members of the Senate.

She also said the need for Senate concurrence was made an integral part of the nature of a special kind of treaty, one involving foreign military bases, troops or facilities, by Article 18, Section 25 of the Constitution.

The text of the EDCA was evidence that it belonged to the category of a prohibited treaty, namely a treaty involving foreign military bases, troops, or facilities without the concurrence of the Senate, she said.

“Any understanding in written form is a treaty as long as it complies with the requisites within that country of a treaty,” she said.

Otherwise, all the administration has to do is to claim that a piece of paper is not a treaty but an executive agreement and thus needs no Senate concurrence, even if the Constitution clearly states that a treaty needs Senate approval, according to Santiago.

Santiago also scoffed at arguments that the Philippines needed the EDCA as defense in its  maritime dispute with China.

“You know, these diplomatic ins and outs are extremely complicated. There is no possible basis for saying it’s simple, let us side with America and it will fight the Chinese for us and that will be over. Of course not, what are you saying?” she said.

She said both the US and China have been working in the dark.

“We don’t know what they really are doing. We must rid ourselves of this naive attitude that we are moving markers and chess pieces on the board and you can see everything they are doing,” he said.  SFM