Japan’s new leader aims to beef up security ties when he visits Vietnam and Indonesia next week amid concerns about Beijing’s growing assertiveness, but he is likely to steer clear of the harsh anti-China rhetoric used by his US counterparts.

Japanese Prime Minister Yoshihide Suga, whose resume is scant on diplomatic experience, is following in predecessor Shinzo Abe’s footsteps by making the two Southeast Asian nations the destination for his first overseas trip since taking office in last month.

“I think it is important to show … we put more emphasis and importance on that region and we are interested in the security situation, especially in the South China Sea,” said former Japanese diplomat Kunihiko Miyake, a special adviser to Suga. 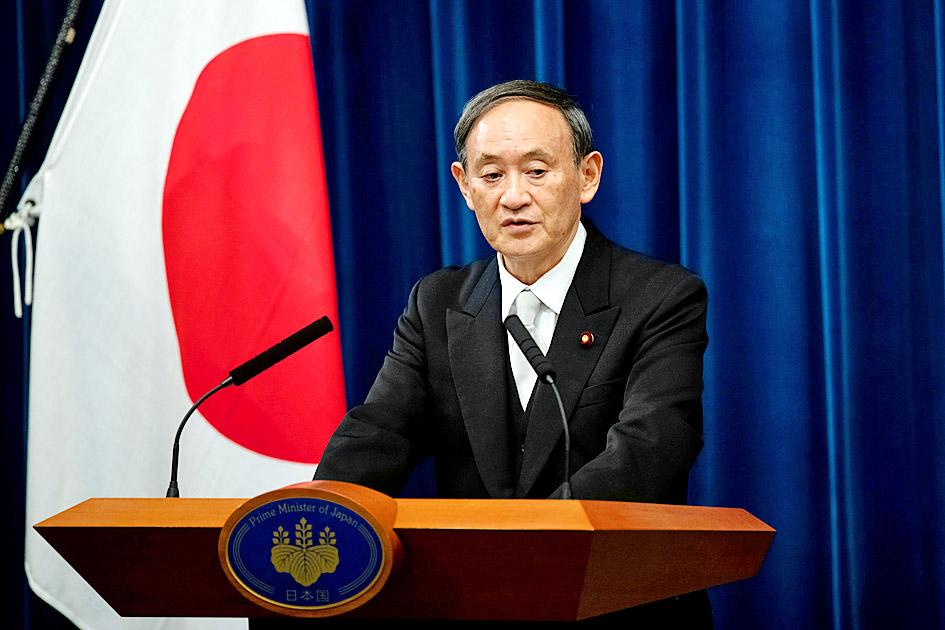 Suga is to visit Vietnam, chair of the 10-member ASEAN, and Indonesia, its biggest economy, on a four-day trip from tomorrow, Japanese Chief Cabinet Secretary Katsunobu Kato said yesterday.

Japan must balance its deep economic ties with China with security concerns, including Beijing’s push to assert its claims over disputed East China Sea isles, he said.

Abe oversaw an improvement in ties, but some ruling party officials want a tougher stance.

ASEAN members, many of which have territorial feuds with China in vital South China Sea waterways, are wary of alienating a big economic partner and reluctant to become entrapped in an intense confrontation between the US and China.

Scott Harold, associate director at Rand Corp’s Center for Asia-Pacific Policy, said that Japan’s approach is to be firm, calm and advance its interests without asking countries to explicitly push back against China.

Japan plans to sign an agreement with Vietnam to allow it to export defense equipment and technology to the country, the Nikkei reported this week.

A Japanese official said that Japan was talking about enhancing defense cooperation with both Hanoi and Jakarta, but could not comment on the outcomes.

Suga’s trip follows last week’s Tokyo meeting of the Quad, an informal grouping of India, Australia, Japan and the US, which Washington sees as a bulwark against China.

Beijing has denounced the Quad as a “mini-NATO” meant to contain China.

Hop said that Vietnam could endorse the Quad as the group becomes more inclusive and as Beijing becomes more aggressive in South China Sea.

However, Indonesia is wary.

“Indonesia, which puts a high primacy on ASEAN’s centrality, is going to be very ambivalent about the Quad because it undermines that whole principle… They are unlikely to jump on the Quad bandwagon,” said Euan Graham, a senior fellow at the Singapore-based International Institute for Strategic Studies.