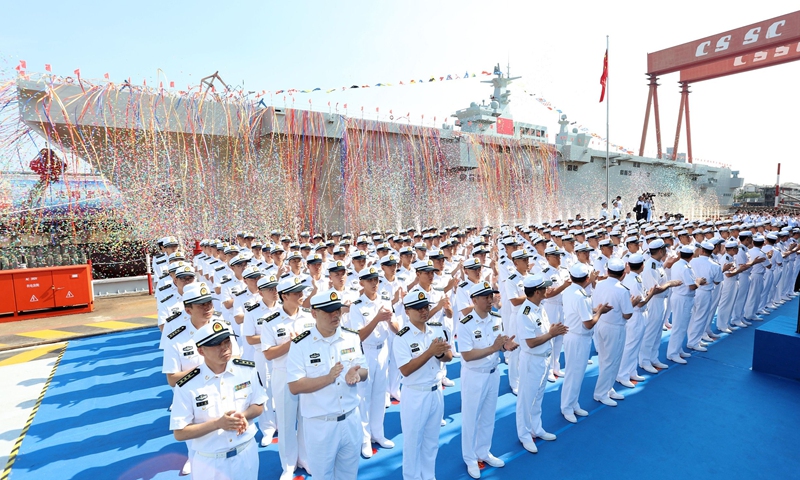 The location is very close to the island of Taiwan, the report said.

This is the first time the Type 075 has been spotted in Sanya. Local residents in Shanghai, where the ship was built, claimed the ship left the city in late October.

China’s first Type 075, which was launched in September 2019, successfully completed its first sea trial in August this year.

A new sea trial in the South China Sea will further test the warship, which is a necessary step before it enters service with the PLA Navy, Song said.

China’s second aircraft carrier also underwent testing and training in the South China Sea in November 2019, prior to being commissioned into the PLA Navy in December 2019.

When the aircraft carrier, later named the Shandong, left its shipyard in Dalian, Northeast China’s Liaoning Province, and sailed to the South China Sea for the sea trials and eventually arrived in Sanya for a commissioning ceremony, it made a transit through the Taiwan Straits.

Chinese mainland military experts said that from a geographical point of view, if a ship wants to sail between the northern and southern parts of China, it would likely sail through the Taiwan Straits, as it is the shortest route, Song said.

This could also apply to the Type 075. PLA warships can sail through the Taiwan Straits however they want, and there is no “middle line” as both sides are Chinese territories, analysts said.

It would be very normal if the Type 075 sails through the Taiwan Straits, and media and authorities on the island of Taiwan should not over-interpret it, Song said.

However, as a type of warship designed to play a major role in amphibious assault missions, the Type 075 amphibious assault ships are expected to make a possible reunification-by-force operation one of their top priorities, analysts said.

Amphibious assault ships mainly conduct vertical deployment and landing missions on islands and reefs like the island of Taiwan and those in the South China Sea. With their large flat flight decks, these warships can transport troops vertically via helicopters much faster than using only horizontal means, Beijing-based naval expert Li Jie told the Global Times when the second Type 075 ship was launched in April.